Powell's Indiespensable Book Club
Volume 58: A Doubter's Almanac
Since 2008, Powell's Books of Portland, OR has run a book club/subscription service that sends a new, autographed hardcover book in a custom slipcase to its subscribers. Each mailing is accompanied with notes on the selected book and a surprise selection of extra items.

It feels like it's been a long time, but it's only been about a month so I guess I'm just impatient. 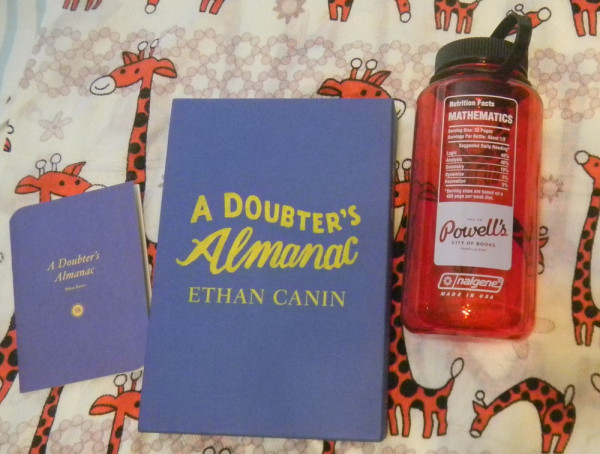 Well, let's dive in and see what we've got in the box.

A DOUBTER'S ALMANAC by Ethan Canin
Milo Andret is born with an unusual mind. A lonely child growing up in the woods of northern Michigan in the 1950s, he gives little thought to his own talent. But with his acceptance at U.C. Berkeley he realizes the extent, and the risks, of his singular gifts. California in the seventies is a seduction, opening Milo’s eyes to the allure of both ambition and indulgence. The research he begins there will make him a legend; the woman he meets there—and the rival he meets alongside her—will haunt him for the rest of his life. For Milo’s brilliance is entwined with a dark need that soon grows to threaten his work, his family, even his existence.
Spanning seven decades as it moves from California to Princeton to the Midwest to New York, A Doubter’s Almanac tells the story of a family as it explores the way ambition lives alongside destructiveness, obsession alongside torment, love alongside grief. It is a story of how the flame of genius both lights and scorches every generation it touches. Graced by stunning prose and brilliant storytelling, A Doubter’s Almanac is a surprising, suspenseful, and deeply moving novel, a major work by a writer who has been hailed as “the most mature and accomplished novelist of his generation.”

This title keeps popping up in industry newsletters and recommendation lists, but I'm not familiar with the author.  I have no idea if this is my cup of tea or not!  I'm certainly willing to give it a try.  As with all Indiespensable featured titles, a small chapbook containing an interview with the author is also included in the package.


MATHEMATICS WATER BOTTLE
The main character in A Doubter's Almanac is a mathematician, so this red water bottle is entirely appropriate. On one side, the "nutrition facts" for mathematics is listed. On the other, a meter measures how many ounces remain in the water bottle. The more you drink, the farther up the lineage of famous mathematical thinkers you'll progress. Pythagoras begins the list, and it continues through Euler to Fibonacci to Newton and beyond.  It's basically the same bottle they sent back in Volume 48, which I love for its sturdiness but rarely use because the base won't fit in my car's cupholders.

Great theming on the box - I love that the water bottle actually ties into the story of the book.

Posts from This Journal “books” Tag