Powell's Indiespensable Book Club
Volume 57: Mr. Splitfoot
Since 2008, Powell's Books of Portland, OR has run a book club/subscription service that sends a new, autographed hardcover book in a custom slipcase to its subscribers. Each mailing is accompanied with notes on the selected book and a surprise selection of extra items.

It's been a really long time since the last Indiespensable!  For a while I was starting to wonder if I'd accidentally been unsubscribed, because several months have gone by without a peep from Portland.  But at long last, my box is here.  Problems with credit card payments delayed my box, it seems.  For some reason, they were having trouble processing certain kinds of credit cards, and eventually I had to call in with a debit card to get my box cleared.  (Powell's actually offered to comp the box since the trouble was on their end, but Volume 56's charge had been waived for me so I didn't think it right to get another free box from them.) 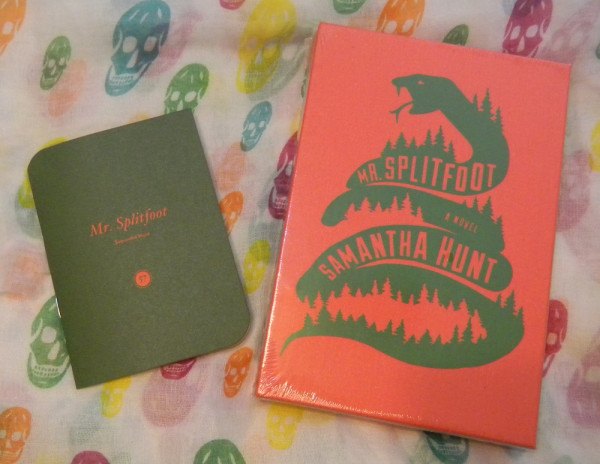 MR. SPLITFOOT by Samantha Hunt
A contemporary gothic from an author in the company of Kelly Link and Aimee Bender, Mr. Splitfoot tracks two women in two times as they march toward a mysterious reckoning.

Ruth and Nat are orphans, packed into a house full of abandoned children run by a religious fanatic. To entertain their siblings, they channel the dead. Decades later, Ruth’s niece, Cora, finds herself accidentally pregnant. After years of absence, Aunt Ruth appears, mute and full of intention. She is on a mysterious mission, leading Cora on an odyssey across the entire state of New York on foot. Where is Ruth taking them? Where has she been? And who — or what — has she hidden in the woods at the end of the road?

As with previous Indiespensable selections, the book is signed and comes in a custom slipcase. A small chapbook containing an interview with the author accompanies the book.  I'm excited by this selection because it sounds like a FANTASTIC read. 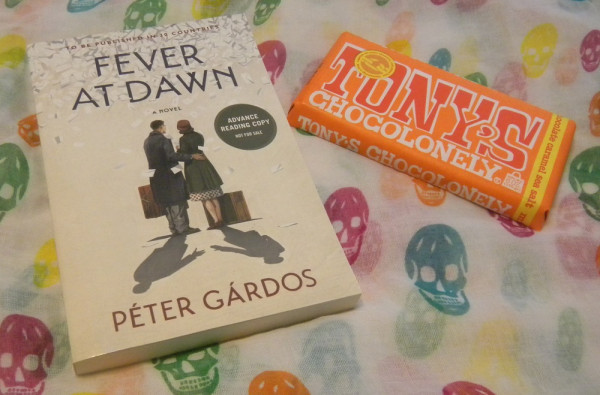 FEVER AT DAWN by Peter Gardos (ARC)
July 1945. Miklos is a twenty-five-year-old Hungarian who has survived the camps and has been brought to Sweden to convalesce. His doctor has just given him a death sentence — his lungs are filled with fluid and in six months he will be gone. But Miklos has other plans. He didn't survive the war only to drown from within, and so he wages war on his own fate. He acquires the names of the 117 Hungarian women also recovering in Sweden, and he writes a letter to each of them in his beautiful cursive hand. One of these women, he is sure, will become his wife.

In another part of the country, Lili reads his letter and decides to write back. For the next few months, the two engage in a funny, absurd, hopeful epistolary dance. Eventually, they find a way to meet.

Based on the true story of Péter Gárdos's parents, and drawn from their letters, Fever at Dawn is a vibrant, ribald, and unforgettable tale, showing the death-defying power of the human will to live and to love.

Don't get me wrong, it sounds like a lovely and entertaining book.  The thing is, I'm still so burnt out on books related to World War II.  I feel like every other book is set in this time period and I just can't get excited about it.  I might try to swap this one rather than read it.

TONY'S CHOCOLONELY CHOCOLATE CARAMEL SEA SALT BAR
This bar is to be taken seriously: Tony’s Milk Chocolate as you have always ‘known it from us’ filled through-and-through with caramel along with a hint of sea salt. Chosen as the favorite from our set of 2012 limited editions bars, it is now available in unlimited quantities.

Hi, enormous chocolate bar.  You're welcome here!  Although these candy bars come from Amsterdam, it looks like Powell's got them from a store in Portland.  So it's semi-local?  All I know is that it's really, really good.