Savor the Dark Book Club
June 2016
Quarterly Co. is a subscription box service company that partners with celebrities to "curate" boxes, usually themed around food or fashion or cool gadgets, which are mailed out four times a year. For their book and chocolate-themed box, Quarterly partnered with Ghirardelli.

Chocolate and books are two of my favorite things to consume. I go through both in absurdly large quantities. Pairing the two items in a subscription service? That's a match made in heaven! I found out about Quarterly's Savor the Dark Book Club, a subscription box limited to only three mailings, and immediately wanted to sign up. I did question the wisdom of shipping chocolate bars in the summer heat, but after considering the amount of candy I've had sent to me and the fact that I can't think of any major meltdowns, I thought it would be safe enough. 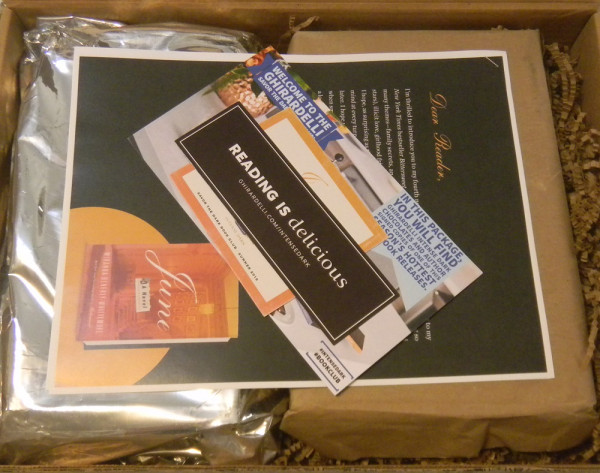 I opened the box and it looked like there won't be any problems with melted chocolate. It was packaged separately in its own box, next to an ice pack and wrapped in another bag. I turned my attention to the letter at the top of the box, a note from Miranda Beverly-Whittemore welcoming readers to her novel. Attached to the letter was a list of discussion questions for her novel June and several recipes that I think must tie into the novel, because not a one calls for Ghirardelli chocolate. 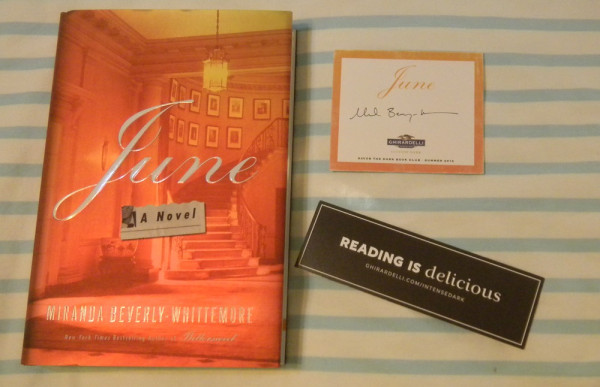 JUNE: A Novel by Miranda Beverly-Whitemore
Twenty-five-year-old Cassie Danvers is holed up in her family’s crumbling mansion in rural St. Jude, Ohio, mourning the loss of the woman who raised her—her grandmother, June. But a knock on the door forces her out of isolation. Cassie has been named the sole heir to legendary matinee idol Jack Montgomery's vast fortune. How did Jack Montgomery know her name? Could he have crossed paths with her grandmother all those years ago? What other shocking secrets could June’s once-stately mansion hold?

Soon Jack’s famous daughters come knocking, determined to wrestle Cassie away from the inheritance they feel is their due. Together, they all come to discover the true reasons for June’s silence about that long-ago summer, when Hollywood came to town, and June and Jack’s lives were forever altered by murder, blackmail, and betrayal. As this page-turner shifts deftly between the past and present, Cassie and her guests will be forced to reexamine their legacies, their definition of family, and what it truly means to love someone, steadfastly, across the ages.

Sounds OK. It's not a novel I would have been likely to pick up on my own, but it sounds interesting enough. I'm sure I'll find it diverting enough on a lazy summer afternoon.  The book was not autographed by the author, but a bookplate that she had signed was thrown into the box. It's not nearly as collectible, but the fact that they thought to include it was a nice touch. 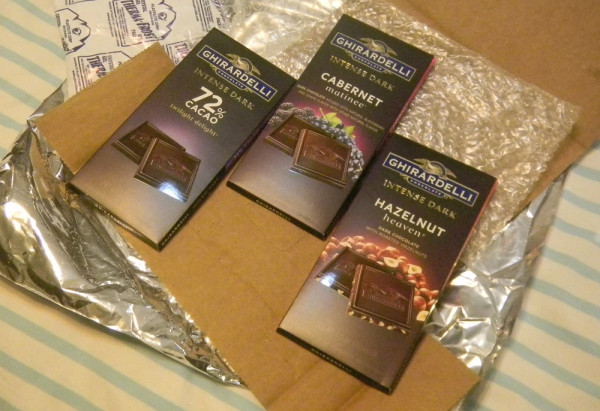 GHIRARDELLI INTENSE DARK 72% Cacao Twilight Delight Chocolate Bar
The luxuriously deep and velvety chocolate in Ghirardelli Intense Dark is made by selecting the highest quality beans to create our all natural exclusive bean blend. Experience a moment of timeless pleasure as the intense chocolate pleasure lingers and time stands still.

All three of these chocolate bars sound delicious. I've had some of the Intense Dark chocolate bars before, and they always have a nice balance between the bitterness of the chocolate and the added in flavors like blackberry and hazelnut.


The Savor the Dark Book Club is a nice enough idea, but it's rather a poor deal. Each box is $45 ($40 + $5 S&H) and the value of the items inside is nowhere near that. June is a $26 book, and 3.5 oz Ghirardelli chocolate bar sells for $3.95 at the grocery store (and often will be on sale for $$2.50 or $3). Most subscription boxes have a value higher than the price tag, since it's likely that the recipient will like every single thing in the box. After seeing the contents of this box, I immediately canceled the subscription. I can pick my own book and my own chocolates without the risk of getting something I don't want.

It's too bad, because the box idea was a good one. If another company attempts something similar in the future, I'd be open to trying again.
Tags: books, chocolate, quarterly.co, snacks, subscription boxes, surprises in the mail
Subscribe