Awesome Pack #6: This retro set is not so awesome...

My latest Awesome Pack arrived the day before yesterday, but I haven't had time to do more than glance at the box, still sitting by our door where my husband left it. But I've got a little bit of time to stop and breathe, so let's see what we got this month. 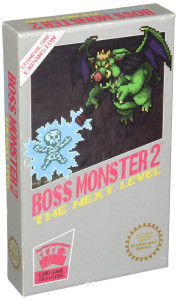 BOSS MONSTER 2: THE NEXT LEVEL
2-4 players
The original Boss Monster challenged players to become the ultimate villains: video game-style Bosses. Now Boss Monster 2 builds on the original in every way! An all-new set of 160 cards, Boss Monster 2 is playable as a standalone game or as an expansion to the core set.
Dark Heroes and Hybrid Heroes raise the stakes, while Epic Spells and "cycling" rooms give players more options and flexibility. Boss Monster 2 features everything that made the best-selling original a hit with players of all skill levels, with fresh new mechanisms and exciting new options.
With more Bosses, more unique cards, and more ways to slay hapless adventurers, Boss Monster 2 will take your dungeon to The Next Level!
Game's retail price: $24.95

This looks like a fun game to play with Seanie. It looks like a sequel, but the game claims it can be enjoyed without the original so we'll give it a try and see. We do love video game tropes. 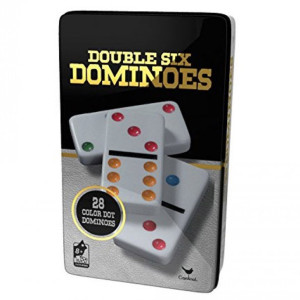 As I stare at the tin containing one set of 28 double six color dot dominoes it occurs to me that I have no idea how to place this classic game.  When I was growing up, dominoes were for lining up in long chains on the floor and knocking down.  I guess it's high time I learn how to play! 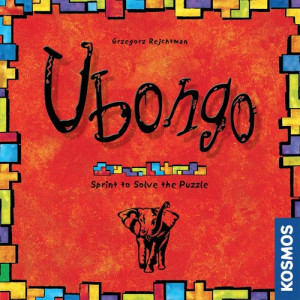 UBONGO Teaser Game
1-2 players
Ubongo is a fast-paced, addictive, and easy-to-learn geometric puzzle game. Players race against the timer and against each other to solve a puzzle of interlocking shapes. The faster you solve the puzzle, the more gems you get. The player with the most valuable gem treasure after nine rounds of solving puzzles wins! Here's how it works: Each player receives a set of 12 polyominos - geometric shapes formed of equal-size squares joined edge to edge in different arrangements. At the start of each round, each player gets a new puzzle panel. A roll of the die determines which polyominos you must use to perfectly fill in the empty spaces on the puzzle panel. Any players who complete the puzzle within the time limit yell out "Ubongo!" and grab a gem at random from the bag. The fastest player also gets a blue gem and the second fastest an amber gem. Each gem color is worth a different amount of points. After nine rounds, the player with the most valuable gem collection wins.
Game's retail price: ??

The description above is for the full-sized version of this game.  The little teaser included in the Awesome Pack is just a sample.  It has a half-dozen puzzle board challenges for the player to try, but that's it.  No gems.  I'm not even sure this is even available for retail sale; it just looks like a sample the company gave to reps to help them sell games to their accounts.  It looks fun, but I feel like it doesn't contribute much value to the Pack. 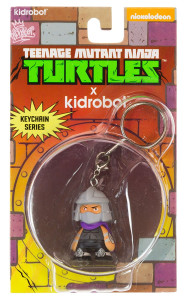 I was a little annoyed to see this in the box, because I've consistently requested NO TOYS in my Awesome Packs.  I don't want more adorable little dust-catchers in the house.  However, if I had to get a toy anwyay, I'm glad I got the Shredder - of all the TMNT characters available in this keychain series, he is the best.  I haven't decided if I'll keep him or re-gift him.


This was not a good Awesome Pack.  In fact, it's far and away the worst one I've received.  I'm quite unhappy with it.  The games are cheap and despite the fact that every month I request no toys or pop culture collectibles, they threw one in.  I'm hoping this is an outlier, but if the quality of Awesome Packs has taken a nose dive than I won't be keeping a subscription much longer.