Awesome Pack #7
Every month, after you've received your box, Awesome Pack sends out a short survey for you to fill out to give them feedback about what you liked and didn't like about your box. I forgot to do this after last month's box, but I thought it wouldn't be too much of a problem since I'd done it all the other months.  Apparently, the company doesn't save your responses from one month to the next, because the box I received this month seems like it was targeted to someone else. 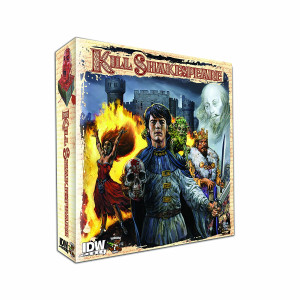 Kill Shakespeare
2-4 players
Protect the realm from King Richard, Lady Macbeth and their dark army! Based on the acclaimed comic book from IDW Publishing, this co-op adventure brings the greatest characters of Shakespearean literature to life in a shared universe rife with peril. Players will go on quests assigned by the bard himself in an attempt to prove themselves worthy of taking over the title of Scribe of the Land.
Game's retail price: $59.99
OK, I guess I have no complaints about this game.  I really like IDW's Kill Shakespeare series, and I had no idea that there was a board game based on the graphic novels.  I'll look forward to playing this one, although with game play estimated between 2-3 hours I don't know if I'll have any luck getting anyone to play with me.  My friends seem to prefer short, quick games. 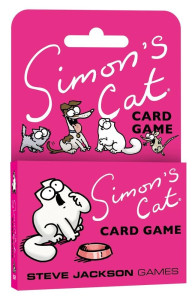 Simon's Cat Card Game
2-4 3-6 players
This fast-paced card game for 3 to 6 players features adorable art taken directly from animator and illustrator Simon Tofield's YouTube series, Simon's Cat, which has hundreds of millions of views. Go around the table playing cards to escape Simon's attention. Get caught and you get Blame. Get too much Blame and you get fed last. No one wants that.
Game's retail price:

I don't know what Simon's Cat is ("YouTube sensation" can mean anything nowadays) but it looks like some sort of Garfield parody?  I'm a bit skeptical of the quality of this game, as the production looks quite rushed.  The packaging says the game is for 2-4 players on one side, but a sticker hastily pasted to the back claims it is for 3-6 players.  Which is it?  The concept sounds intriguing, so I might play it, but the holidays are coming up soon and this looks like it has potential as a white elephant gift.

What is this toy? I have no idea.  Some sort of hideous cyclopian creature with wheels coming out of its butt?  DON'T WANT!  Good job ignoring my "no toys" request, Awesome Pack. 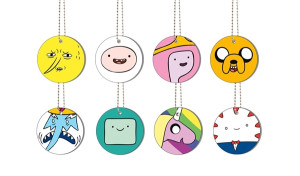 Adventure Time Dog Tags
Retail price: ???
This is a mystery bag.  Each one contains one of twenty Adventure Time-themed dog tags.  Since I'm not even a fan of the show, I didn't bother to open it and see which character's dog tag we got.  This is definitely going to be regifted.

Super Art Fantasy Coloring For Adults
Retail price: ??? ($1?)
Wow.  Awesome Pack, this is really poor quality, a cheap coloring book with awful line drawings that you'd only ever find at a dollar store.  There's nothing "adult" about it, content-wise.  I'm pretty sure it's just a kid's coloring book that the publisher tried to rebrand to cash in on the adult coloring book craze last year.

Sigh.  Not a fan of this box.  I'll make sure to fill out the survey this time and we'll see if the boxes return to their former glory.  If I get a third stinker of a box, though, Awesome Pack is out.