Powell's Indiespensable Book Club
Volume 60: Barkskins
Since 2008, Powell's Books of Portland, OR has run a book club/subscription service that sends a new, autographed hardcover book in a custom slipcase to its subscribers. Each mailing is accompanied with notes on the selected book and a surprise selection of extra items. 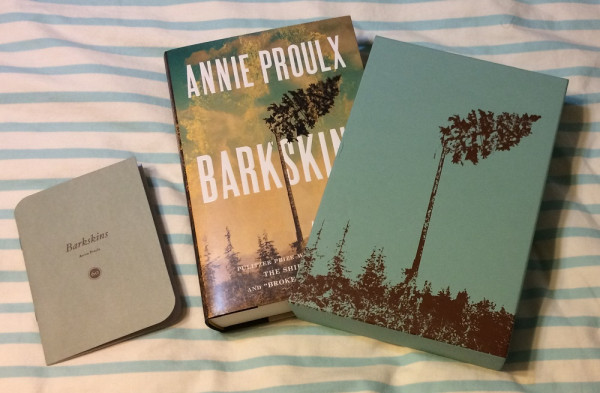 BARKSKINS BY ANNIE PROULX
From Annie Proulx—the Pulitzer Prize-­ and National Book Award-­winning author of The Shipping News and “Brokeback Mountain,” comes her masterwork: an epic, dazzling, violent, magnificently dramatic novel about the taking down of the world’s forests.
In the late seventeenth century two penniless young Frenchmen, René Sel and Charles Duquet, arrive in New France. Bound to a feudal lord, a “seigneur,” for three years in exchange for land, they become wood-cutters—barkskins. René suffers extraordinary hardship, oppressed by the forest he is charged with clearing. He is forced to marry a Mi’kmaw woman and their descendants live trapped between two inimical cultures. But Duquet, crafty and ruthless, runs away from the seigneur, becomes a fur trader, then sets up a timber business. Proulx tells the stories of the descendants of Sel and Duquet over three hundred years—their travels across North America, to Europe, China, and New Zealand, under stunningly brutal conditions—the revenge of rivals, accidents, pestilence, Indian attacks, and cultural annihilation. Over and over again, they seize what they can of a presumed infinite resource, leaving the modern-day characters face to face with possible ecological collapse.
Proulx’s inimitable genius is her creation of characters who are so vivid—in their greed, lust, vengefulness, or their simple compassion and hope—that we follow them with fierce attention. Annie Proulx is one of the most formidable and compelling American writers, and Barkskins is her greatest novel, a magnificent marriage of history and imagination.
There's been some positive buzz for this book at our bookstore, and I do like a good masterwork of historical fiction.  I haven't read any of Annie Proulx's previous books - or see the movie Brokeback Mountain, for that matter - but that just makes me feel more curious.

Like all Indiespensable books, Barkskins is signed by the author and comes in a custom slipcase with a small chapbook that includes an interview with Proulx. 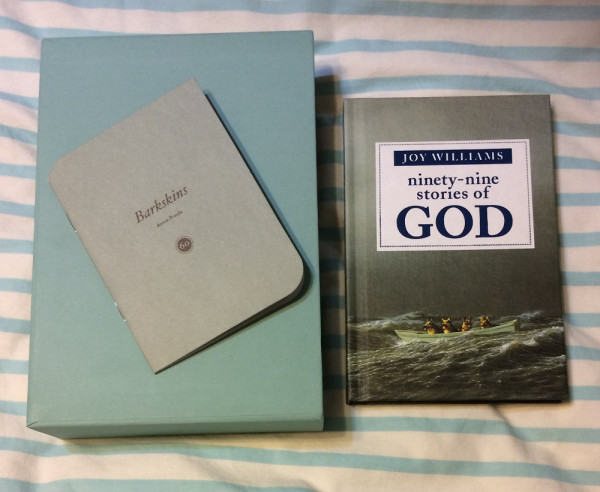 NINETY-NINE STORIES OF GOD BY JULIE WILLIAMS
From “quite possibly America’s best living writer of short stories” (NPR), Ninety-Nine Stories of God finds Joy Williams reeling between the sublime and the surreal, knocking down the barriers between the workaday and the divine.
Pulitzer Prize and National Book Award finalist Joy Williams has a one-of-a-kind gift for capturing both the absurdity and the darkness of everyday life. In Ninety-Nine Stories of God, she takes on one of mankind’s most confounding preoccupations: the Supreme Being.
This series of short, fictional vignettes explores our day-to-day interactions with an ever-elusive and arbitrary God. It’s the Book of Common Prayer as seen through a looking glass―a powerfully vivid collection of seemingly random life moments. The figures that haunt these stories range from Kafka (talking to a fish) to the Aztecs, Tolstoy to Abraham and Sarah, O. J. Simpson to a pack of wolves. Most of Williams’s characters, however, are like the rest of us: anonymous strivers and bumblers who brush up against God in the least expected places or go searching for Him when He’s standing right there. The Lord shows up at a hot-dog-eating contest, a demolition derby, a formal gala, and a drugstore, where he’s in line to get a shingles vaccination. At turns comic and yearning, lyric and aphoristic, Ninety-Nine Stories of God serves as a pure distillation of one of our great artists.
Hmm.  Not sure I'm interested in this second book.  Joy Williams is not an author I'm familiar with, but one thing I've learned about myself is that I'm not a big fan of short story collections.  Well, that's not entirely true...I like compilations of many authors, but if it's just one author I tend to get bored after 3-4 stories.  But I'll give this a try, since Powell's sent it.  I can trust their booksellers' judgement, right?