Powell's Indiespensable Book Club
Volume 61: Here I Am
Since 2008, Powell's Books of Portland, OR has run a book club/subscription service that sends a new, autographed hardcover book in a custom slipcase to its subscribers. Each mailing is accompanied with notes on the selected book and a surprise selection of extra items. 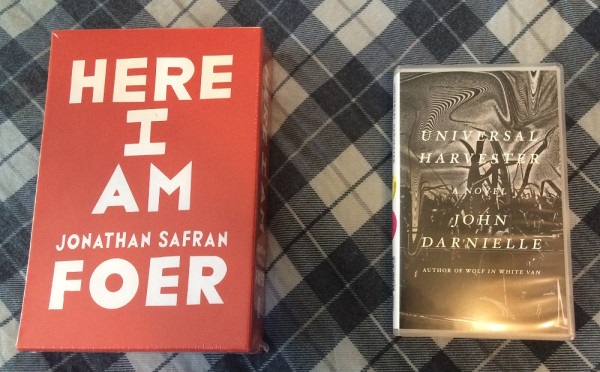 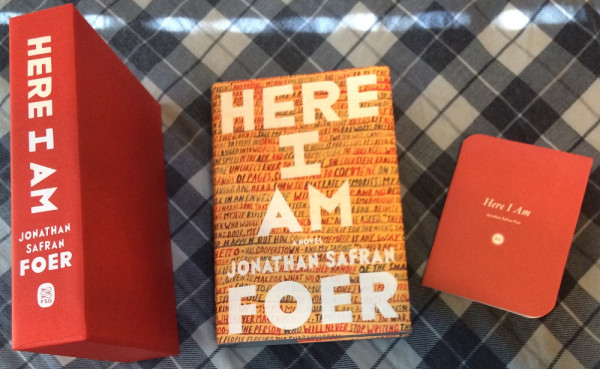 HERE I AM by Jonathan Safran Foer
In the book of Genesis, when God calls out, “Abraham!” before ordering him to sacrifice his son, Isaac, Abraham responds, “Here I am.” Later, when Isaac calls out, “My father!” before asking him why there is no animal to slaughter, Abraham responds, “Here I am.”
How do we fulfill our conflicting duties as father, husband, and son; wife and mother; child and adult? Jew and American? How can we claim our own identities when our lives are linked so closely to others’? These are the questions at the heart of Jonathan Safran Foer’s first novel in eleven years―a work of extraordinary scope and heartbreaking intimacy.
Unfolding over four tumultuous weeks in present-day Washington, D.C., Here I Am is the story of a fracturing family in a moment of crisis. As Jacob and Julia Bloch and their three sons are forced to confront the distances between the lives they think they want and the lives they are living, a catastrophic earthquake sets in motion a quickly escalating conflict in the Middle East. At stake is the meaning of home―and the fundamental question of how much aliveness one can bear.
Showcasing the same high-energy inventiveness, hilarious irreverence, and emotional urgency that readers loved in his earlier work, Here I Am is Foer’s most searching, hard-hitting, and grandly entertaining novel yet. It not only confirms Foer’s stature as a dazzling literary talent but reveals a novelist who has fully come into his own as one of our most important writers.
I recognize Jonathan Safran Foer's name, but I've never read his books.  I can't decide if I think this sounds like something I'd enjoy, but I might give it a try since he has become quite the darling of the literary world.  If I read at least a little of the book, it'll help me fake my way through being a literary hipster, right? 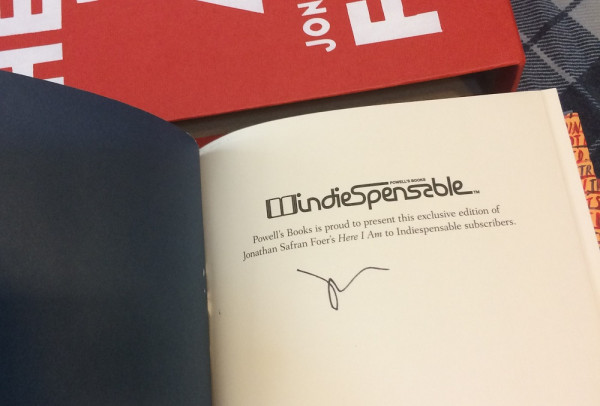 Each Indiespensable featured book has an autographed page added to the book, which is pretty neat.  It's a feature I really appreciate with the subscription.  Unfortunately, in this instance they didn't do a very good job gluing the page in - you can see some damage from stray glue spots along the page edges at the spine. 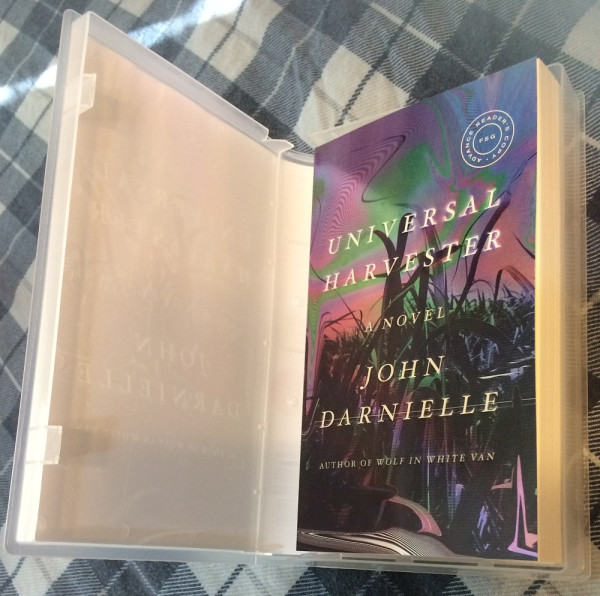 UNIVERSAL HARVESTER by John Darnielle
Jeremy works at the Video Hut in Nevada, Iowa. It’s a small town in the center of the state―the first a in Nevada pronounced ay. This is the late 1990s, and even if the Hollywood Video in Ames poses an existential threat to Video Hut, there are still regular customers, a rush in the late afternoon. It’s good enough for Jeremy: it’s a job, quiet and predictable, and it gets him out of the house, where he lives with his dad and where they both try to avoid missing Mom, who died six years ago in a car wreck.
But when a local schoolteacher comes in to return her copy of Targets―an old movie, starring Boris Karloff, one Jeremy himself had ordered for the store―she has an odd complaint: “There’s something on it,” she says, but doesn’t elaborate. Two days later, a different customer returns a different tape, a new release, and says it’s not defective, exactly, but altered: “There’s another movie on this tape.”
Jeremy doesn’t want to be curious, but he brings the movies home to take a look. And, indeed, in the middle of each movie, the screen blinks dark for a moment and the movie is replaced by a few minutes of jagged, poorly lit home video. The scenes are odd and sometimes violent, dark, and deeply disquieting. There are no identifiable faces, no dialogue or explanation―the first video has just the faint sound of someone breathing― but there are some recognizable landmarks. These have been shot just outside of town.
So begins John Darnielle’s haunting and masterfully unsettling Universal Harvester: the once placid Iowa fields and farmhouses now sinister and imbued with loss and instability and profound foreboding. The novel will take Jeremy and those around him deeper into this landscape than they have ever expected to go. They will become part of a story that unfolds years into the past and years into the future, part of an impossible search for something someone once lost that they would do anything to regain.

I usually dislike receiving an ARC (Advance Reader Copy) in Indiespensable boxes, because these promotional books are free from the publishers to booksellers so I always have plenty of them around the house.  However, I am a sucker for good promotional packaging, and the decision of some marketing smartiepants to put the ARC inside of a video case, just like the ones used by Blockbuster and Hollywood Video back in the day, makes this a somewhat collectible item and a pretty neat idea.  Plus, I enjoy horror novels, so I would have happily read this one anyway.

This is the second month in a row that the box has only contained books, no special items like candy or water bottles. I miss that extra touch - it set the books apart.

Posts from This Journal “books” Tag