Powell's Indiespensable Book Club
Volume 63: Moonglow
Since 2008, Powell's Books of Portland, OR has run a book club/subscription service that sends a new, autographed hardcover book in a custom slipcase to its subscribers. Each mailing is accompanied with notes on the selected book and a surprise selection of extra items. 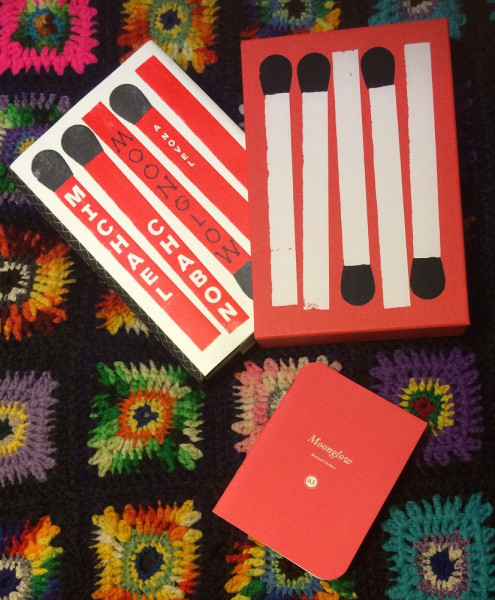 MOONGLOW by Michael Chabon
Following on the heels of his New York Times bestselling novel Telegraph Avenue, Pulitzer Prize-winning author Michael Chabon delivers another literary masterpiece: a novel of truth and lies, family legends, and existential adventure—and the forces that work to destroy us.
In 1989, fresh from the publication of his first novel, The Mysteries of Pittsburgh, Michael Chabon traveled to his mother’s home in Oakland, California, to visit his terminally ill grandfather. Tongue loosened by powerful painkillers, memory stirred by the imminence of death, Chabon’s grandfather shared recollections and told stories the younger man had never heard before, uncovering bits and pieces of a history long buried and forgotten. That dreamlike week of revelations forms the basis for the novel Moonglow, the latest feat of legerdemain from Pulitzer Prize-winning author Michael Chabon.
Moonglow unfolds as the deathbed confession of a man the narrator refers to only as “my grandfather.” It is a tale of madness, of war and adventure, of sex and marriage and desire, of existential doubt and model rocketry, of the shining aspirations and demonic underpinnings of American technological accomplishment at midcentury, and, above all, of the destructive impact—and the creative power—of keeping secrets and telling lies. It is a portrait of the difficult but passionate love between the narrator’s grandfather and his grandmother, an enigmatic woman broken by her experience growing up in war-torn France. It is also a tour de force of speculative autobiography in which Chabon devises and reveals a secret history of his own imagination.
From the Jewish slums of prewar South Philadelphia to the invasion of Germany, from a Florida retirement village to the penal utopia of New York’s Wallkill prison, from the heyday of the space program to the twilight of the “American Century,” the novel revisits an entire era through a single life and collapses a lifetime into a single week. A lie that tells the truth, a work of fictional nonfiction, an autobiography wrapped in a novel disguised as a memoir, Moonglow is Chabon at his most moving and inventive.
I have read Michael Chabon before, and I was not a fan.  HOWEVER - the book I read was The Yiddish Policemen's Union, which I have been told is a lesser Chabon, and more importantly the fact that I don't care for the mystery/noir genre soured my experience.  My husband really liked Kavalier and Clay, but since Moonglow has been sent to me that will be my next foray into Chabonland.

This copy of Moonglow has a custom slipcase, as all Indiespensable titles do, and a chapbook containing an interview with the author. 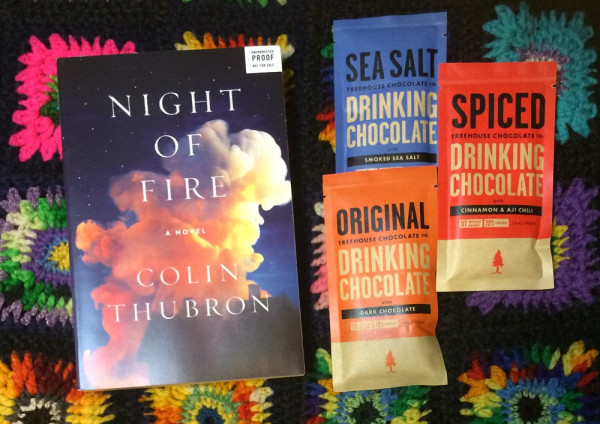 NIGHT OF FIRE by Colin Thubron
Award-winning, bestselling novelist and travel writer Colin Thubron returns to fiction with his first novel in more than a decade, a searing, poetic masterwork of memory.
A house is burning, threatening the existence of its six tenants—including a failed priest; a naturalist; a neurosurgeon; an invalid dreaming of his anxious boyhood; and their landlord, whose relationship to the tenants is both intimate and shadowy. At times, he shares their preoccupations and memories. He will also share their fate.
In Night of Fire, the passions and obsessions in a dying house loom and shift, from those of the hallucinating drug addict in the basement to the landlord training his rooftop telescope on the night skies. As the novel progresses, the tenants’ diverse stories take us through an African refugee camp, Greek Orthodox monasteries, and the cremation grounds of India. Haunting the edges of their lives are memories. Will these remembrances be consumed forever by the flames? Or can they survive in some form?
Night of Fire is Colin Thubron’s fictive masterpiece: a novel of exquisite beauty, philosophical depth, and lingering mystery that is a brilliant meditation on life itself.
An ARC (Advance Reader's Copy) came in the box, a novel called Night of Fire that will be released in January 2017.  Reading through the plot description, the book doesn't sound like one that I'd pick out from a shelf.  I may read it, but it is far more likely that I will take it to work and put it on the ARC shelf in hopes that one of the other employees will find it intriguing.

TREEHOUSE CHOCOLATE CO. DRINKING CHOCOLATE
There are three packs of hot chocolate, one each in ORIGINAL (Dark Chocolate), SPICED (Cinnamon & Aji Chili), and SEA SALT (Smoked Sea Salt).  The instructions say "Just add water!"  I love hot chocolate in wintertime,but I'm too lazy to fuss with melting down chocolate to get the really good stuff, so if this proves to be a rich, high-quality instant packet then Treehouse will find a lifelong customer.