Awesome Pack #8: OK, so I don't have to cancel yet

AWESOME PACK #8
Awesome Pack is a monthly subscription box that delivers board games, card games, and other "awesome" entertainment.  The last couple of boxes have failed to wow me, so I was seriously considering ending my subscription if this box didn't thrill me.  Despite a mis-step or two, Awesome Pack definitely improved this month. 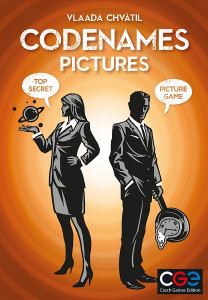 CODENAMES: PICTURES
2-8 PLAYERS
What are these strange symbols on the map? They are code for locations where spies must contact secret agents!
Two rival spymasters know the agent in each location. They deliver coded messages telling their field operatives where to go for clandestine meetings. Operatives must be clever. A decoding mistake could lead to an unpleasant encounter with an enemy agent – or worse, with the assassin! Both teams race to contact all their agents, but only one team can win.
Codenames: Pictures differs from the original Codenames in that the agents are no longer represented by a single word, but by an image that contains multiple elements.
Game's retail price: $19.95

I am thrilled that this game was in the box.  The original CODENAMES was in an earlier Awesome Pack, and it has proven very popular at Donna's gaming parties.  This sounds like a fun spin on the concept that could prove very challenging and lead to hilarious results. 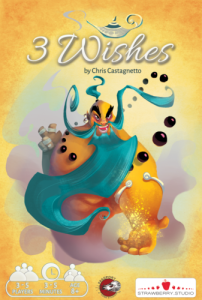 3 WISHES
3-5 PLAYERS
A not-so-nice-but-not-too-evil genie appears as if from nowhere (someone, somewhere probably did rub a lamp) and pitches the crowd against one another, granting the most astute player no fewer than three wishes — but not all wishes come true, and only the player with the right balance between super powers, benefits for the world, and selfish gifts will be enter the good graces of the genie.
Game's retail price: $7-$10 (guessing)

This one looks fun for a fast, silly game.  It's easy to learn, according to the box, so maybe I'll be able to play it with my nephews in another year or two.  Each game only lasts 3-5 minutes, according to the box, so this might be a good one to keep around for when you're waiting around somewhere, for a restaurant reservation or in a movie line, and just need to kill a few minutes. 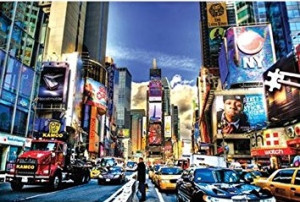 THE WORLD'S SMALLEST JIGSAW PUZZLE: TIMES SQUARE
This puzzle has the smallest pieces ever to be die-cut!  Features 234 pieces and tweezers. Recommended for ages 8 and up.
Puzzle's retail price: $5-$10 (guessing)

I do like puzzles!  This is a weird one.  It's a tiny, postcard-sized puzzle, made up of pieces that are so itty bitty they must be handled with tweezers.  It won't be the most challenging puzzle (except the challenge of not losing the pieces, I guess) but it'll be a fun novelty to play with. 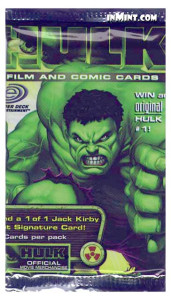 HULK TRADING CARDS
Someone must have been cleaning out a warehouse and stumbled across a box of these, because this is an item that I'm sure NOBODY wants.  It's not awesome.  It's lame.  Really, really lame.
I'll just go ahead and save this for the next time I need a White Elephant gift.  It can be someone else's disappointment.