Well, it's not explicitly Christmas, but since it's December it's hard not to associate the box with the holiday.  Will this box be naughty or nice?  Time to open it up and see... 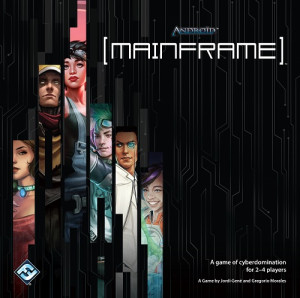 ANDROID: MAINFRAME
2-4 PLAYERS
Run fast, score big! Android: Mainframe is a fast-paced strategy game set in the not-too-distant future of the Android universe!
In the game, you and up to three opponents are elite cybercriminals known as runners who are competing for control of a vulnerable bank's various accounts. At the beginning of the game, you mark your arrival by the placement of your first access point. Then, each turn, you get to take a single action: establish another access point, execute a program, or pass. Your goal is to use the programs at your disposal to secure your access points so that they control as many of Titan's vulnerable accounts as possible.
This looks interesting.  I love strategy games, and this doesn't sound quite like any other that I've played before.  I'll have to play-test it with Seanie soon, since it's a two-player game. 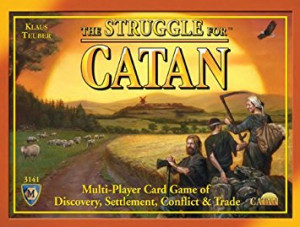 THE STRUGGLE FOR CATAN CARD GAME
2-4 PLAYERS
The Struggle for Catan is a fast-paced game between the 2-4 factions developing newly settled Catan. Manage your resources to build settlements, cities, city improvements, knights, and roads that generate victory points or special abilities. While your settlements, cities, and city expansions remain yours, valuable roads and knights change hands. Varied expensive city improvements give you additional victory points and lasting advantages, so they're generally key to victory. As in The Settlers of Catan board game, you win by being the first to acquire and play 10 victory points.

I love Settlers of Catan!  I can't remember if I played this card game before, but it's a great idea.  Taking a great board game and translating it into a smaller, more portable version is definitely a winning idea.  Next time Seanie and I go somewhere on a plane, I'm taking this with us so we can play it while we're in the air. 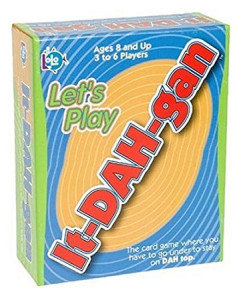 LET'S PLAY IT-DAH-GAN
3-6 PLAYERS
From the Manufacturer:  Pronounced (it-again) is a great trumping card game where you have to play under to stay on the top.
I'm not so excited about this one, although it is another game.  It-Dah-Gan seems...childish, for lack of a better descriptor.  You have cards printed with words like "DAH-Top" "DAH-Bottom" "in-DAH-pitz" etc, and you discard them as fast s possible to become the first person with less than fifty points.  Other players trip you up with the cards they throw down, forcing you to take more cards.  It's got fast game play and it seems pretty basic, but it doesn't seem challenging. We'll see, though.  I haven't actually played it yet.

No weird accessories in this box like Hulk cards or Adventure Time dog tags - hooray!  I might have to take a break from this subscription box, though.  I enjoy it every month, but I've got plenty of games now.  I should give myself and my family a chance to play them all before getting more.